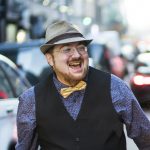 ZISL SLEPOVITCH (artistic director, reeds, vocals), is an internationally acclaimed ethnomusicologist, educator, clarinetist, pianist, composer, Yiddish singer, founder of Litvakus and Minsker Kapelye bands, Yiddish Language and Culture Instructor at The New School. Dmitri Slepovitch has performed with Michael Alpert, Paul Brody, Psoy Korolenko, Frank London, Selim Sesler, Yale Strom, and Theresa Tova, to name a few. Having moved to the US in 2008, Slepovitch brought over his rich collection of Litvak Jewish musical folklore, based on which he created a theater piece, Traveling the Yiddishland, presented by The Folksbiene. He scored and musically directed a number of different theater and film productions; Taught internationally at seminars in Yiddish /klezmer music and Jewish studies, including BIMA at Brandeis University. 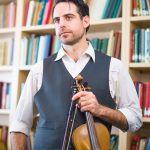 CRAIG JUDELMAN (violin) grew up in Seattle, where he began studying the violin at an early age. He augmented his classical studies with jazz and folk music of various sorts, all of which he studied at Bard College. Jewish music first caught his ear in the synagogue, but as he discovered Klezmer he was overcome by the music’s power both for prayer and performance. He has spent time traveling around the world studying folk music but now makes his home in Brooklyn, where he teaches violin, composes music for theater and plays with his old-tIme string band, The Dust Busters. 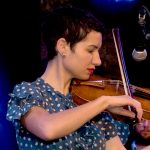 ZOË AQUA (violin) is a performer, teacher and composer living in Brooklyn, New York. Quickly becoming an in-demand violinist in the klezmer scene, she is a founder of Tsibele, an all-women klezmer quartet; in 2015 she joined Litvakus, a New York based critically acclaimed klezmer collective. Her extreme versatility allows her to get instantly comfortable in a variety of genres. Among her other groups, Ms. Aqua can be seen playing with Pete Rushefsky, Fraydele, Ensemble XTerranica, and The Blue Dahlia. Zoë Aqua is an experienced pedagogue, teaching general music and violin at Family Life Academy Charter School II, located in the South Bronx. She has also taught well-received workshops for adult musicians through the New York Klezmer Series. 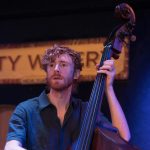 TAYLOR BERGREN-CHRISMAN (bass) has been performing in New York City for the past eight years, becoming part of the Klezmer community of musicians and enthusiasts as well as playing jazz and classical music for theatre, film, and dance productions. In the year 2000, he moved to Brooklyn where he joined the Eastern-European klezmer-punk band, Golem. Taylor plays for other groups representing traditional music of the U.S. as well as Latin America, Central Asia, and Africa.

JOSHUA CAMP (accordion), founding member of the bands One Ring Zero and Chicha Libre, has composed and played in projects of various genres over the years, including: country, folk, Irish, klezmer, meringue, and experimental groups as well as composing music for film, dance, theater, and multi-media installations. As an accordionist, Joshua has been in the recent Broadway productions of ‘Fiddler on the Roof’, ‘Three Penny Opera’, and on the soundtrack to the Lincoln Center production of ‘The Coast of Utopia’ by Tom Stoppard.

SAM WEISENBERG (percussion) has written, produced, sung, struck, slid, and plucked throughout North America. Based in Brooklyn, he’s currently playing with Secondhand Pinups, the Spontaneous Jewish Choir, and all sorts of freelance music.  He is a managing partner of the Weisenberg Bros. Poik Company and a founding member of the Luftwaffle Jewish Music Collective.

SASHA LURJE (Berlin, Germany) has joined her collaborative effort with Litvakus in a new daring project GoyFriend (Друг-Гой): The Jew Through the Eyes of the Other (2017). A native of Riga, Latvia, Sasha has been singing since the age of 3. She has performed with wide variety of groups in various styles ranging from classical to folk, jazz, rock, and pop. Parallel to her singing career she has also been involved in several theater groups where she focused on musical and improvised theater. She has performed and taught Yiddish singing in Russia, Europe and North America and has been a longstanding artist and faculty member at Yiddish Summer Weimar. Among Sasha’s projects and bands are Forshpil, STRANGELOVESONGS with Daniel Kahn, Semer Ensemble, You Shouldn’t Know From It, and now— Litvakus.

DANIELLA RABBANI  is a featured vocalist on Litvakus’ EP and has performed with Litvakus in their program of Yiddish folk and theater songs. The New York Times raves “The sassy, raspy voiced Daniella Rabbani will leave you twirling in the streets”. Rabbani made her Off Broadway debut starring in Gimpel Tam for which the New York Observer noticed her “sympathetic, utterly alive performance”. A graduate of the Stella Adler studio at NYU Tisch, Rabbani loves carrying on the legacy of Yiddish theater and song and has performed all over the world with mentor Zalmen Mlotek. Rabbani’s TV and film work can be seen on FX’s The Americans, FOX’s Laughs, PBS’ Triangle Fire, Sundance’s Appropriate Behaviour, Tribeca’s Be Here Nowish and in her upcoming film OMA inspired by her experience as a third generation Holocaust survivor. More at daniellarabbani.com.

MICHAEL ALPERT has been a pioneering figure in the renaissance of East European Jewish klezmer music for over 30 years. He is internationally known for his award-winning performances and recordings with Brave Old World, Kapelye, Khevrisa, David Krakauer, Itzhak Perlman, Theodore Bikel, German Goldenshteyn and salsa legend Larry Harlow. Raised in a Yiddish-speaking family, he is noted for his original Yiddish songs. Adept in 20 languages and ethnic vocal styles from Russian to Mexican, his appearances include concert venues throughout North America, Europe, Israel, and Australia. 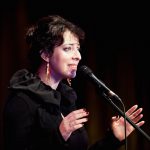 ZHENYA LOPATNIK  is a leading voice in a new generation of Yiddish singers and songwriters emerging from the former Soviet Union. Born into an assimilated Ukrainian-Jewish family, Lopatnik only discovered Yiddish in her mid-20s, but quickly made her mark in the field. In collaboration with pianist Yuriy Khainson, Zhenya has released three albums of original songs, and has been the frontwoman with Kharkov Klezmer Band for many years. She is a key organizer of Kharkov Klezmer Teg, an international klezmer festival. Lopatnik has won the Golden Chanukiah Prize awarded by the World Congress of Russian Jewry.

Zhenya Lopatnik & Litvakus perform her highly engaging interactive program for Jewish families with kids where she acts as a storyteller, singer, and educator.